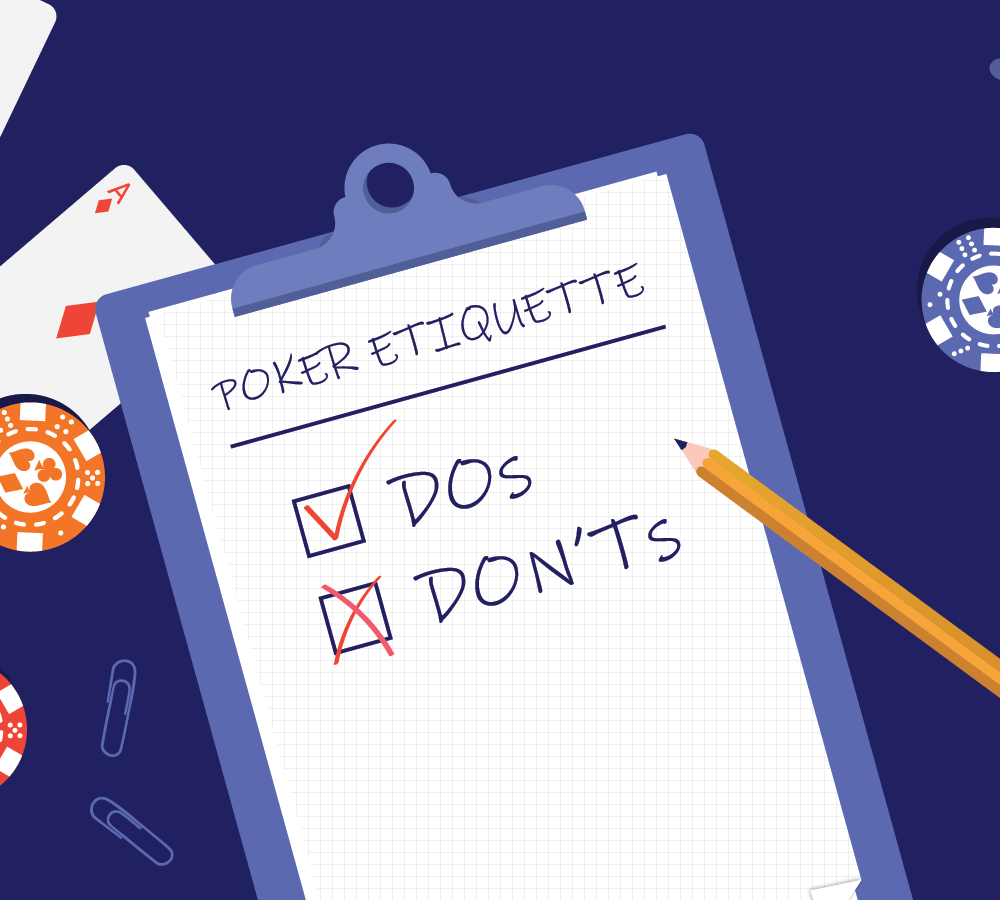 Poker requires a level of socialization and interactions. Good poker players have mastered the table etiquettes that make them good at reading people and fun to play with.

There are unwritten Poker rules that every player should know. These rules ensure  professionalism, sportsmanship, and mutual respect amongst players.

While at the table, it’s important that you stay focused and concentrate on the game. It’s not cool to be the player that needs to be constantly reminded that it’s your turn to act.

While there’s no rule saying you should pay one hundred percent attention to the game, an obvious lack of interest can be frustrating and quite disrespectful to your opponents.

Sometimes, the game can get exhausting especially when things aren’t going your way. However, you should try to make an effort.

After folding, you should try to stay quiet for the sake of other players on the table. It’s not right for you to reveal the cards you folded or react to the cards in the middle.

After the hand is over, you can reveal the flop to the table should you choose to.

Poker is a competitive game and giving out unsolicited advice can come off as unprofessional and rude.

You’re a player and not a coach and unless someone seeks for your opinion you should keep it to yourself.

As an adult and a poker player, you should respect your opponent. Don’t be rude or uncouth. Try to control your emotions and don’t act violently or in an uncivilized manner such as tearing cards and throwing chips.

Get started today by visiting our website and creating an account. You also get the chance to play at The best online casino in the UK to get a lot of amazing bonuses. You definitely do not wan to miss this!

You should put your chips on the table in a manner that will be easy for other players to be able to calculate. It’s not fair to be shady about your chips.

Playing fair displays a spirit of sportsmanship that will earn you the opponents respect. It will also boost your confidence as you know you were able to win based on merit rather than cheating.

Be Nice To Newcomers

Every player was once a beginner at some point. Being nice to newcomers is a simple etiquette that shows that you’re a professional with sportsmanship.

Try to make their first experience a nice one and try to show them the ropes. It’s easy to become tempted to lord yourself over newbies, but you should resist the temptation.

Bad beats are painful and it’s normal to want to have an emotional reaction. However, arguing about bad beats makes you look like a sore loser and it makes other players uncomfortable.

When you suffer a bad beat you should take it in your stride and move on without offering an excuse or an explanation. Poker is a game of luck and strategy so instead of complaining you should accept the loss with the belief that you will also get your chance to win.

When studying your opponent for tells or on suspicion of cheating, you should be discreet. You shouldn’t be eager to want to be the one who nabs the cheating opponent.

Don’t be eager to point fingers at opponents because you might wrong and false accusations can be ruin both the game and greatly upset an opponent.

Hence observe your opponent with utmost discretion and try not to make other players uncomfortable.

Don’t Argue With The Dealer

Dealers aren’t unfair and arguing with them is pointless. If you think the game isn’t going in your favor you should accept your luck and hope for better luck instead of trying to argue your case.

Arguing with the dealer makes you look like a jerk and it will make other players uncomfortable.

Even in victory, you need to learn to be modest. It’s not wrong to celebrate but you shouldn’t go on yelling and screaming the room down.

You can celebrate without rubbing it in the faces of other players. Gloating will make you look unprofessional and it’s also disrespectful to your opponents.

Celebrating too much can also make you feel too cocky which might weaken your game. In extreme cases, it can discourage your opponent and make them walk away.

There’s no rule saying you should tip the dealer but this is common poker etiquette. Where tipping is forbidden then you should refrain from tipping.

Tipping the dealer is just a simple way of appreciating them for their efforts and it can mean a lot for someone who doesn’t earn much. It also wouldn’t hurt to be in the staff’s good books.

Poker etiquette are basically standards of behavior that helps to maintain the orderliness of the game.

Observing the unwritten poker rules shows that you have the spirit of sportsmanship and a player with whom others want to share a table.